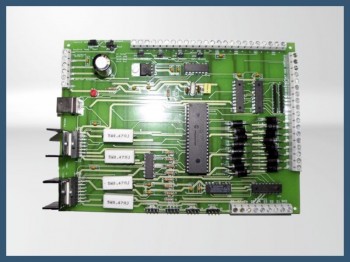 The USB DCMotors Plus has been designed to interact with different motors, outputs and inputs It can be used for Auto-Throttle engine control systems, controlled force (force feedback) and different types of automations. This card connects via the USB port and is managed through the IOCP protocol using at least version 4.2 of SIOC.USB DCMotors Plus:Unlike her younger sister, USB DCMotors, this card allows the use of much more powerful DCmotors, including the possibility of using additional servo-motors as well as the use of inputs and outputs both analog and digital. It also adds to the firmware autoposicionado system to manage automatic self positioning systems without any programming.The card also includes self-sense of the DCmotors. Ie, through analog input card can be measured at all times the current flowing through the coils of the motors so that the user can know which efforts are underway motors. This is very useful for limit detection in the movements and also allows us to act according to the force generated in the motors.In the future, without having to change electronics, just with a different firmware, you can also manage stepper motors of great power.Specifications:• Motors up to 48 volts.• Up to 4 DC motors. 2 amp constant, 2.5 Amp nonconstant, 3 amps peak.• PWM speed control motors (8 bits).• Control the direction of the motors.• Overtemperature protection.• Up to 4 servo-motors controlled (type RC) 10-bit resolution.• 8 digital outputs up to 50 V/500mA. • Internal power supply 5 volt selectable for use with servo motors and/or digital outputs.• Two optional power supply for digital outputs.• 8 analog inputs 10-bit internal / 8-bit external.• Posibility to auto-sensing power on each engine using analog inputs.• Self-positioning system for DC motors (max. 3 motors) using analog input (using potentiometers, magnetic sensors, ...).• Up to 10 digital inputs.